The Everything Store Book Summary 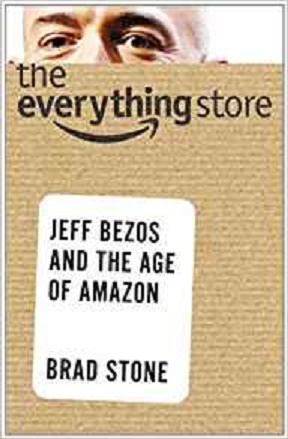 Jeff Bezos, the CEO and founder of Amazon, recently hit $80 billion for his personal net worth. As a student of entrepreneurship and personal finance, I’m awestruck by his success with his entrepreneurial pursuits and want to understand his thought processes. Bezos requires many of his employees to read books off his reading list. My reasoning is, if I’m looking to think like one of the richest humans on earth, I should consume the same information as him. First though, I needed to learn more about Bezos and his company – enter the book, The Everything Store.

The Everything Store, by Brad Stone, looks to uncover the history of Amazon. Stone interviewed over 300 people – former and current employees, and other executives from the industry, to get an understanding of the last 20 years at Amazon. The results are very interesting and I couldn’t put the book down!

In this post, I give a brief summary of The Everything Store, my takeaways, and my recommendation for you.

Summary of The Everything Store

Brad Stone interviewed over 300 people, current and former Amazon employees, and Bezos family members, and provides us an in-depth look into life at Amazon. Jeff Bezos wanted Amazon to become the everything store: a store which would offer everything at a great convenience to the customer. In his pursuit of the everything store, he developed a corporate culture of relentless ambition, little work/life balance, and success at the highest level.

The Everything Store goes into the beginning of Amazon, where it was just Bezos and a handful of employees working out of a garage in Seattle. At first (mid 1990’s), Amazon was just a bookseller and was literally buying books from various publishers and then sending them out whenever a customer purchased one off their website. This process was clunky and needed refining.

Over the next few years, distribution centers were set up and the website became better equipped to handle the customer orders.

Jeff Bezos didn’t want to stop at being the best bookseller – he wanted Amazon to be an everything store. By the late 1990’s and into the 2000’s, Amazon ventured into different product categories. Starting with movies and electronics, then getting into toys. Over time, if Amazon wanted to get into another product category it wasn’t already in, it would look to buy a successful company in that space.

For example, Zappos was a very successful shoe company in the mid 2000’s and Amazon wanted to start selling shoes. Amazon offered to buy Zappos, but Zappos executives declined. Amazon then applied a tenacious tactic – they started selling shoes and dropped the prices extremely low. By cutting prices, this put tremendous pressure on Zappos. Finally, Zappos agreed to sell, and Amazon was able to expand into the shoe industry. This strategy was performed multiple times over Amazon’s history and shows how tenacious they were and are.

The Everything Store also details the battles of Amazon and many other retail companies: Barnes & Noble, Target, Walmart, Toys ‘R’ Us, Best Buy, Circuit City, etc.

In the early 2000’s, Amazon started focusing more on technology – both surrounding supply-chain management and the distribution of goods, but also on software and infrastructure. Amazon created Amazon Web Services (AWS), which allowed all businesses to tap into the power of cloud computing. This was a game changer for Amazon and now is a huge income stream.

In addition to the software and infrastructure, Amazon created the Kindle in 2007. E-readers were experimented with in the early 2000’s, but flopped after the hardware was not good enough for mass production. Amazon created a superior product and had a massive launch for its e-reader, the Kindle. By producing and selling Kindles, Amazon strengthened itself as a major player in both physical and digital books.

The Culture of Amazon

The culture of Amazon is modeled after Jeff Bezos’ style: never give up, be frugal, be resourceful, always look to serve the customer, and be consistent. Many employees have left Amazon because the work/life balance was horrible. Jeff Bezos doesn’t care much for work/life balance; he wants to create something great and will not stop at any cost to do so!

Former Employees and Family Members Chime In on The Everything Store

When I was preparing to write this book review, I read the customer reviews on the Amazon page for The Everything Store. There were multiple reviews from different executives and key players in the book.

Mackenzie Bezos, Jeff’s Wife, chimed in and said there were many inaccuracies. She gave it a 1 star rating.

While numerous factual inaccuracies are certainly troubling in a book being promoted to readers as a meticulously researched definitive history, they are not the biggest problem here. The book is also full of techniques which stretch the boundaries of non-fiction, and the result is a lopsided and misleading portrait of the people and culture at Amazon. An author writing about any large organization will encounter people who recall moments of tension out of tens of thousands of hours of meetings and characterize them in their own way, and including those is legitimate.

Employee #1, Shel Kaplan sang a different song. He gave it a 4 star rating.

Since Mr. Stone did not have access to Jeff Bezos for this book, but had to rely on previous interviews and the accounts of others, it would be surprising if there weren’t a few mistakes regarding his thought processes. As part of my agreement to be interviewed for this book, I was allowed to read a draft of the chapter which covered the time I was there, and I offered a number of corrections, some of which Mr. Stone was able to verify and incorporate. To the extent I am quoted, my quotes are, while not complete, fair and in context. I don’t love or agree with everything that Mr. Stone wrote about me — especially his broader conclusions regarding the circumstances of my departure from the company — but I do think it was fair and reasonable.

Being a writer myself, I can understand why Brad Stone would stretch the truth a little bit for a more enjoyable read. Hopefully in the future, Bezos will allow himself to be interviewed and give a real, unadulterated glimpse into his thoughts and career. If you pick this book up, just be aware of these criticisms.

With all books I read, I look to have takeaways and action steps. Jeff Bezos is someone I look up to as a role model in business, but also in my personal life. He has been married to the same woman for many years, saves his money, and looks to make the world a better place. In addition, he is tenacious and always looking to help – all qualities I’m looking to embody in my life.

In my business pursuits, I’m looking to provide value to my readers and customers, and make sure that the experience is enjoyable for all parties.

Amazon is constantly searching for ways to reduce costs and pass on those savings to customers in the form of lower prices. This is embedded in their leadership principles:

We try not to spend money on things that don’t matter to customers. Frugality breeds resourcefulness, self-sufficiency and invention. There are no extra points for headcount, budget size or fixed expense.

This principle comes from Bezos himself. Frugality is something I look to apply in my life, and as a personal finance blogger, it’s equally important to note that it’s not what you make, but what you save! I personally love the wording of the principle above, what do you think?

Our Recommendation for The Everything Store

I really enjoyed The Everything Store. Frankly, my review doesn’t give the book enough credit – the details the author goes into are at a very low level (he talks about legal battles and those outcomes!) While some of the key players working for Amazon have came out and said there are some inaccuracies in the book, I still believe it was worth the read. The Everything Store gives us a behind the scenes look at the making of the behemoth now known as Amazon, and a picture of Jeff Bezos’ management style.

For me, I’m going to constantly focus to provide value to the customer (you the reader), be frugal and careful with my funds, and work diligently each and every day towards my goals. I’m excited to read the books off Bezos’ reading list! Look forward to those in the coming months!

Would you ever open an online store? Are you a member of Amazon?Save