The Art of Asking Book Summary 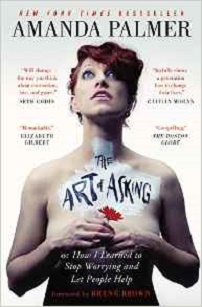 Amanda Palmer is not your average person by any means. Incredibly polarizing, some love her crazy theater girl ways. Others despise her and call her a sell-out, a poser, and a scammer.

The Art of Asking: How I Learned to Stop Worrying and Let People Help is an expansion of the popular TED talk Amanda Palmer gave in 2013.

Asking for help can be one of the hardest things to do in today’s world.

I think I can accomplish anything I want in my life, and I’m guessing you might share the same mindset.

What we don’t realize is how it is perfectly okay to ask for help and rely on others if we can’t do everything by ourselves.

The Art of Asking is a fascinating read into the life of Amanda Palmer, and was very inspiring and motivating.

Book Summary of The Art of Asking

The Art of Asking is the story of Amanda Palmer. The Art of Asking goes through her early days working as The Bride, her music career, her interactions with her fans, and her thoughts on help and asking.

Amanda Palmer as The Bride

After graduating college, Amanda Palmer didn’t want a real job. A 9-5 desk job would not be for her.

Instead of going to school, Amanda decided to dress up as a bride – she wore a wedding dress and give flowers to people on the street.

She would stand on the side of a street, up on top of a milk crate, and perform for the people on the street. Over time, she was making more money by being The Bride than she was at her various other gigs, so she kept doing it.

At this time, Amanda was thinking about the concept of being “seen” vs. being “looked at”. Being “seen” is having someone look into your eyes and trusting your gaze – trusting you are there with them.

Too many of us go through each day only “looking at” others. “Seeing” others involves a level of compassion and empathy.

Amanda Palmer with The Dresden Dolls

After a few years of Bride-ing, Amanda started a band, The Dresden Dolls, with her friend, Brian Viglione.

After each show, Amanda insisted on meeting fans after the show for drinks, autographs, and fun times. She increased her audience through her mailing list, parties, and social media. She would organize “ninja events” by sending out a tweet saying something like “I’m going to be in this city and at this bar at 9 PM – come see me play some music!”

By interacting with her fans on a daily basis through in-person events and social media, she built a fantastic community of fans.

When touring, The Dresden Dolls regularly asked for volunteers, food, couch space, and for local musicians to get up on stage and open for them. Amanda found that asking for help almost always resulted in success. She had created a vibrant artistic community of people who were joyously looking out for each other.

Unfortunately, relations with their record label went south – the label didn’t like the way Amanda was going about promoting her music. They wanted Palmer to stop talking to her current fans to go court new ones – this wasn’t her style.

“The whole point of being an artist, I thought, was to be connected to people, to make a family. A family you were with all the time, like it or not. That was the way we’d been doing it for years, whether or not we had an album or a tour to ‘promote’.”

After many years, she broke away from the label company and tried something completely new.

After Amanda Palmer’s falling out with the record label, she wanted to make a solo album.

Without too much money in the bank, she decided to do something unheard of: a Kickstarter for her album.

Amanda took asking to a whole new level with a Kickstarter campaign for her new album, “Theater of Evil”.

With this Kickstarter, she broke the site’s record at the time ($1.2 million in funding), and went on to launch the tour for the new album.

As she had for the past decade, she asked for local musicians to join her on tour and play. This time, the request was coming from someone who recently became famous for getting over 1 million dollars.

Unfortunately again, she was targeted by many haters for ripping off musicians.

Even when she posted a breakdown of her expenses to prove it wasn’t all profit, the damage was done and her reputation took a hit. That being said, she still had her loyal fans and many social media followers.

Other Interesting Stories Of The Art of Asking

It would be disrespectful of me not to mention some interesting perspectives and stories told about Amanda’s relationships with her husband, Neil Gaiman, and best friend, Anthony.

When Amanda was very young, she became friends with a man in the neighborhood named Anthony. Throughout her story, she references many stories Anthony told her as a young girl, a college student, and a young adult. When Amanda is touring, Anthony became sick with cancer.

In The Art of Asking, Amanda details her struggles with Anthony’s cancer and how much she loves him.

Amanda also discusses her relationship with her husband, Neil, throughout the book. Naturally a very independent woman, Amanda doesn’t like commitment. Being married isn’t natural to her and there are numerous passages discussing her struggles with marriage.

These stories about her relationships truly highlight how Amanda is human and normal. A perfect life doesn’t exist, there will always be improvements, struggles, and tweaks to make over time if you want success.

Great Quotes from The Art of Asking

Here are three quotes from The Art of Asking which resonated with me:

Takeaways from The Art of Asking

The two main takeaways from The Art of Asking are the following:

Let’s dig a little deeper into these main takeaways of The Art of Asking.

The first main takeaway of The Art of Asking is people want to be seen, not just looked at.

When you walk on the streets, people generally will have darting eyes and don’t want to look at you. This situation would fall into being looked at; your presence was acknowledged, but the other person doesn’t care to keep you in their view.

Where I live, in Downtown Minneapolis, there are a number of homeless people. Most walkers just pass by and don’t try to interact. I don’t always give them money, but I do acknowledge them and say hi.

A smile goes a long way 🙂

The second main takeaway is to ask people for help when you need help.

Guess what? People want to help, why should we stress ourselves out and try to do it all?

It comes down to trust. I love the following passage I found in The Art of Asking:

When you accept somebody’s offer for help, whether it’s in the form of food, crash space, money, or love, you have to trust the help offered. You can’t accept things halfway and walk through the door with your guard up. When you openly, radically trust people, they not only take care of you, they become your allies, your family.

If you trust people, they will take care of you and be your friend. You can’t be isolated and try to trust others; it’s not possible.

You can be open to others help and trust they can get it done.

Our Recommendation for The Art of Asking

The Art of Asking was a fantastic read. The Art of Asking gave me insight into the intimate artist-fan relationship and the music industry, and also opened my eyes to being open to asking for help.

Growth as an individual comes through challenge and growing your perspective over time. Living in an echo chamber will not lead to success.

Reading and learning about other people’s success in different areas and careers can provide you a truly strong worldview and perspective.

You should definitely read The Art of Asking, by Amanda Palmer. For me, it was a completely difference perspective on the world, but it was completely worth the read.

Are you afraid to ask for things? What’s holding you back? Have you ever been a street performer?