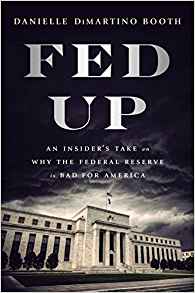 For the past few months, I’ve been trying to challenge myself on my investing strategy and understanding of economics, the markets, and personal finance.

There are many players in the markets:  commercial and investment banks, hedge funds, central banks, insurance companies, retail investors, pensions, and the list goes on and on.

One of these entities is not very well understood: the central banks. In the United States, the Federal Reserve is the central bank and is an institution which many people have no idea about.

On my pursuit of the truth and looking to learn more and more about finance, I came across the book, Fed Up, by Danielle DiMartino Booth.

I thought it was very interesting and helped me understand more about the thought processes and events which took place in the 2000s leading up to 2008, and after 2008.

Many people think that during the next crash that central banks and governments will come to the rescue, but Fed Up reveals why this thought is too optimistic.

The rest of this post includes a summary of Fed Up, my takeaways, and my recommendation for you. Enjoy!

Summary of Fed Up: An Insider’s Take on Why the Federal Reserve is Bad for America

For the past 30 years, the narrative of the global economy has been precisely this when a crash occurs:

Central banks and governments are here to save the day and will do whatever it takes to save the markets . (Even if that means doing ridiculous things.)

Going back less than 20 years gives us two amazing examples of this absurd narrative.

2001, the dotcom bubble burst. The Nasdaq lost nearly 80% of it’s value in a very short amount of time and central banks stepped in to make sure the economy was safe.

The economy was saved! Stocks were back on track!

Fast forward to 2008, and another crash in the markets has occurred.

Again, central banks stepped in and the fed funds rate at the time was dropped from roughly 5% to 0%. In addition, 4.5 trillion dollars were pumped into the system (where before, only $850 billion had been created up until that point!)

But sitting here, I can’t help but look back on some of those numbers and feel a little uneasy. Why should you get money for free? Does it make sense to inflate the money supply by 4 times what it previously was before? What are the consequences of these things?

Danielle DiMartino Booth worked on Wall Street in the late 90’s and early 00’s, and after a career change to journalism, she found herself in the Dallas Federal Reserve Research Department.

After spending some time on Wall Street, becoming wise to the ways of finance, she then went on to pursue a career in journalism at the Dallas Morning News. As a truth seeker, her insight and warnings in the years preceding the Great Financial Crisis of 2008 were well-documented and stand in stark contrast to the mindset of the Fed and then-chairman Ben Bernanke who “found little evidence to support the existence of a national home price bubble.”

In 2006, she joined the Dallas Fed and worked with individuals there to try to steer the economy in the right direction.

Unfortunately, their efforts didn’t work out. With only an MBA, many economics PhD’s across the central banking system of the United States ignored many of the warning signs presented by DiMartino Booth and didn’t take her seriously.

Throughout the book, she highlights the arrogance and hubris that these academics-turned-central bankers possessed and the control they garnered. Rather than diving in the real-time market data, discussions with business owners, and market talk, economists believed their textbooks, unproven assumptions theories, and complex research papers provided new sophistication and certainty with which to manage the domestic and, indeed, the global economy.

Unfortunately, this didn’t help, as many people experienced after 2008.

An Eye-Opening Take on the Happenings of 2008

What DiMartino Booth describes in Fed Up is years of central bank evolution and growth.

The central bank has been influenced by John Maynard Keynes and nurtured by Alan Greenspan, Ben Bernanke, and Janet Yellen. The reality, as so well described by DiMartino Booth, is that of an intellectual contagion.

While this book may be a little alarming to you and slightly “alternative in thought”, DiMartino Booth accomplishes what may be a meaningful step in properly examining what’s wrong with our financial system.

Fed Up provides a post-crisis update of how the Federal Reserve runs the country, and provides us with substantial evidence of how short-cuts and manipulations are employed as a means to their ends.

While the Federal Reserve is probably a necessary institution to have in our government, there needs to be a change.

An Insider’s Recommendation for the Federal Reserve

While the book was fantastic at telling the story of the financial meltdown of 2007-2009, the lead up to that meltdown and the aftermath, what I really liked is how the author finished the book with a recommendation for how the Federal Reserve should be changed.

The gist of her recommendations were to change the dual mandate to a single mandate, shake up the staff to include more business people, and foster an environment of real economic growth (not one stimulated by 0 percent interest rates).

Going a little bit more into the details, the author recommends the following:

With these recommendations, she believes the Federal Reserve can fulfill the role it was created to fulfill – not be a superpower with arguably more power than Congress.

With all things I do, I look to have some takeaways for me to go and apply in my life.

In the past few years, I had a vague understanding of the how the Federal Reserve worked, but at the same time, really had no idea.

First, I have a view on the world which is completely different than yours – and I recognize this. I’m 26, was in high school in 2008, and honestly, wasn’t paying attention back then. Fast forward 10 years, I’m making a great salary and am living a “middle class” lifestyle – 1 week long vacation a year with a few mini vacations spread out on weekends, live in a fairly nice house, have a car, and can get by financially without too much stress.

Unfortunately, many people don’t have this same experience here in 2018. On average, wages haven’t grown since the 80’s. The participation rate for workers in the United States is only 62.9% – down from 66% in 2008. The stock market is soaring, but only 56% of people are invested in stocks.

Is the economy actually doing well? Or have these wonky monetary policies put in place by the Fed distorted things to unsustainable levels and will surely fail at some point?

I don’t know. I sure don’t think I can trust the Central Bank to take care of me though…

Another takeaway I have for myself follows another one of my thoughts which I’ve come to embrace: beware the “guru” and “expert”, and if someone is a “guru” or “expert” in a topic which involves randomness, run as fast as you can the other way.

As the author wrote, Economics PhD’s take an ivory tower view of the world and don’t really know what’s going on. As a statistician in my day job, I had a ton of issues with the assumptions we were taking and it was for this exact reason above.  (That’s one reason why I’ve now moved to role doing web development – a more exact science.)

The world is so incredibly complicated that a simple set of regressions and time series models cannot capture everything. Ignoring other pieces will lead to even more error.

Honestly? I’m worried about what will happen in the next crash. Will it be more of the same or something different? I don’t know. All I can do is prepare and work on practicing sustainability, mindfulness, and resilience.

Our Recommendation for Fed Up

I’ve been trying to challenge myself on my investing strategy and understanding of economics, the markets, and personal finance. As someone who works at a regional bank, I work in a team which is reviewed by individuals from the Federal Reserve, but we never knew exactly what’s going on there.

Danielle DiMartino Booth lifts the curtain a little bit and gives us a first hand account of life in the Federal Reserve. Most books about finance are very technical, but Danielle does an amazing job of distilling the topics into everyday speak. I only found myself re-reading one or two paragraphs in the entire book!

I’d highly recommend Fed Up for anyone who is an investor or a student of personal finance. Many people think that during the next crash that central banks and governments will come to the rescue. Honestly? If you seriously believe that the government is going to act in the best interests of the average consumer, you are a little bit too optimistic.

Fed Up reveals why this thought is too optimistic, and gives an amazing view into inner workings of the mystic Federal Reserve. Check this one out at the library or get it on Amazon. I don’t think you’ll regret reading about something which affects you and everyone else around you.